A POEM OF THANKSGIVING

Kicking through old boxes of papers in the basement, I found a Thanksgiving poem that I wrote when I was in third grade.  It was on loose-leaf paper, and my printing was choppy ("chicken scratches", as the nuns would say) but legible.  I was a few weeks shy of 8 years old when I wrote it, so forgive the irregular meter and the sudden shifts in tense.

Do they write poems in grade school anymore?  If so, they’re probably free-form and deeply expressive, full of wild whirling words and youthful melancholy.   Our poems just had to rhyme and scan; the content was not all that important, although if you managed to work in God or the flag, you got extra points, and possibly a miraculous medal.

When I was a kid, Thanksgiving was one of those holidays that was just suddenly there.   You knew it was coming, you looked forward to the four-day weekend, but you didn’t get over-excited, you didn’t anticipate it like Halloween, certainly not like Christmas.    There was no, “Oh boy, Thanksgiving is almost here!”,  no month-long build-up of Thanksgiving specials and morning-show tutorials about how to cook the perfect turkey or survive your relatives.

To us, Thanksgiving was more of a gateway holiday - it opened the way to the Christmas season and all the festivities pertaining.  Santa Claus showed up at the end of the parade, and the Yule clock was running.   Aside from that, the day itself was just about eating, and mostly grown-up food that held limited appeal. We were supposed to be enticed by the yams because they were candied, but nobody fell for that dodge.

Back then there were no Thanksgiving movies on the Hallmark Channel, and no Thanksgiving songs – “Alice’s Restaurant” hadn’t been written yet.   “Over the River and Through the Woods”, that was it.  And even that was more of a quasi-song to most of us – “Over the river and through the woods, to grandmother’s house we go, the horse knows the way to carry the sleigh through the something-something snow….”  From that point on the lyrics became pretty much a matter of personal preference.   It’s one of those special songs you always got bored with halfway through, the hearty chorus of voices trailing off into quizzical indifference.

At school, Thanksgiving was considered a religious holiday.  Whoever anyone else was thanking, we at St. Patrick’s were thanking God – the Roman Catholic God, thank you -  and as such we were expected to go to church, presumably to make sure He heard us thanking Him.  And even though some of us pointed out that it wasn’t a Sunday or a Holy Day of Obligation, and we didn’t really have to go…we went.

The highpoint of November  - or any month - would come when we got a visit from the art teacher, Miss Kepner.  She would turn up at the classroom door unannounced, and our hearts would leap with delight.   Not that Miss Kepner was a study in charisma; in my fuzzy recollection  she looked like someone’s dotty aunt, with a fluty voice and oversized black-rimmed glasses, and possibly a flask up her sleeve.  But she would step up to the blackboard and show us ingenious strategies for drawing turkeys and pilgrim hats - it was all about circles and cones – and we would copy the chalk sketch at our desks and color it in, and Miss Kepner would check everyone’s work and approve of virtually everything, and then she would sweep out the door and take all the joy with her.  Back to the multiplication tables.

Despite its reputation,  Thanksgiving wasn't a big kids’ holiday.  Maybe the morning was, with the Macy’s parade and “The March of the Wooden Soldiers” prevailing on TV.  But by mid-afternoon, the adults had taken over, and the early excitement had slowed into the ponderous, ritualistic presentation of various edibles. Nana would arrive with a bowl of chilled shrimp, and Dad would put out the tray of celery, and Aunt Helen would sit at the kitchen table with a cigarette and a can of beer as she fed boiled potatoes into the ricer and squeezed the handle down, and the potatoes squirted out of the basket holes like skinny white snakes.  My mother would be at the stove mixing gravy and cooking corn and creaming cauliflower, while Dad kept trying to hand her the first Manhattan of the holiday:  ”Have a drink, Ree, have a drink,” he would persist, while Mom warded him off: “In a minute.”   Finally she would break down and take her drink, and we all would raise our glasses, sodas included, in a toast: “Happy Thanksgiving!”

While the women prepared the dinner and Dad kept mixing, we kids sat in the living room watching “King Kong”.  How “King Kong” came to be considered an appropriate Thanksgiving story, I couldn’t say, but every year channel 9 would air the complete unofficial trilogy – “King Kong”, “Son of Kong” “Mighty Joe Young” – and Channel 11 would counter with the Max Fleischer cartoon of “Gulliver’s Travels” or Danny Kaye in “Hans Christian Andersen”.  Maybe it’s because Thanksgiving itself has such a thin narrative – “The Pilgrims and the Native-Americans have dinner, and…Curtain” – that we can impose whatever traditions we want on it.

For instance, my own essential piece of Thanksgiving music, the one that recalls the emotions of my childhood with a startling Proustian intensity, is “Scheherazade”.  Now why a symphonic suite of glittery Orientalism written by a Russian composer should come to embody for me a uniquely American celebration, I don’t know.  I suspect it might be because there was a vintage Popeye cartoon where he’s pitted against Sinbad, and they used a lot of Rimsky-Korsakov’s music, and Popeye was one of our favorite balloons in the parade, and…well, who knows?  All I can definitively say is that if I don’t hear “Scheherazade” on Thanksgiving, then it’s as if the holiday didn’t happen.

Some people look upon Thanksgiving as a day of unrelieved family stress.  Happily we didn’t experience that in our house.  There was no yelling or recriminations or overturning of mashed turnips; the idea of getting into an argument on a holiday seemed profane and inconceivable.  We ate, we ate some more, we watched a family movie over dessert (Nana's spectacular chocolate layer cake, never to be equalled), and then everybody went home.

But because my father owned a bar, which opened at 6 pm on Thanksgiving night, I know from first-hand observation that many others experienced a far grimmer holiday.   Customers would stream in from far and wide, fleeing their homes like refugees.   Even if it snowed, the place was packed with people desperate to escape their families after an afternoon of hell.   Thanksgiving was one of our busiest nights of the year. That was a real tradition.

Nowadays people seek similar relief by storming Walmart's at the stroke of twelve.  One could rightfully lament that this singular holiday, which has no exclusionary agenda and celebrates nothing more than our reasons to be grateful for life itself, has degenerated into yet another soulless shopping bacchanal, but I can't say that it affects me one way or the other.  I have my Thanksgiving traditions - "King Kong", "Scheherazade" - they can have theirs.  If my fellow celebrants feel that swigging Red Bull and body-checking strangers into a display of flat-screen TVs in the middle of the night will someday constitute a treasured holiday memory,  God bless them.

This Thanksgiving we'll be at my brother Jack's house, and my other brothers will be there, and we'll watch football and Laurel & Hardy and have turkey and shrimp, and at some point we'll raise our glasses in a toast - "Happy Thanksgiving!"- and our relatives out there in Brooklyn and Jersey and Palm Springs and Texas will join us, and so will Mom and Dad, and Betty and Joey Kash, and Nana - and Aunt Helen, who is probably still puffing on a Winston and marveling at how high those Rockettes can kick.

Anyway, I was telling you about a poem I wrote in third grade, and by now you must be chomping at the bit to read it.  Here it is then, "Thanksgiving Day", in its brief but potent entirety: 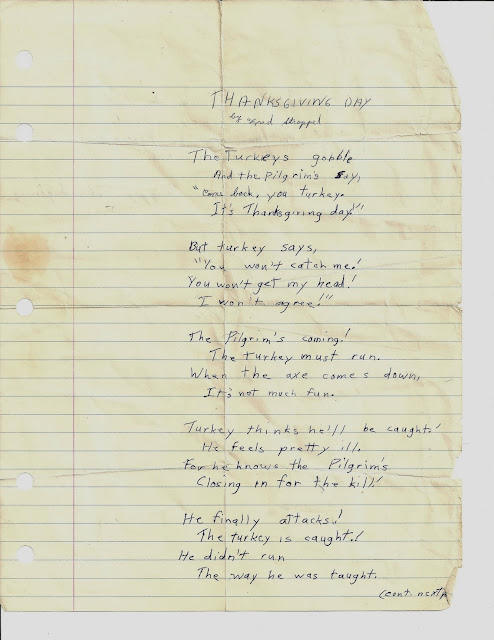 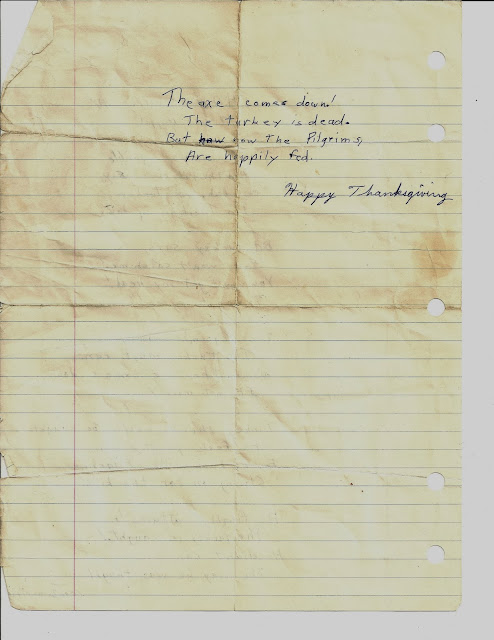 The Turkeys gobble
And the Pilgrims say,
“Come back, you turkey.
It’s Thanksgiving Day!”

The Pilgrim’s coming!
The Turkey must run.
When the axe comes down,
It’s not much fun.

Turkey thinks he’ll be caught!
He feels pretty ill.
For he knows the Pilgrim’s
Closing in for the kill.

He finally attacks!
The Turkey is caught!
He didn’t run
The way he was taught.

The axe comes down!
The Turkey’s dead.
But now the Pilgrims
Are happily fed.