SMALL WORLD, my comedy about the unlikely collaboration of Walt Disney and Igor Stravinsky during the making of "Fantasia", will have a reading at the White Heron Theatre in Nantucket Island this Sunday (October 6) at 5 pm, and again next Sunday at 2 pm.  Wish I could be there! 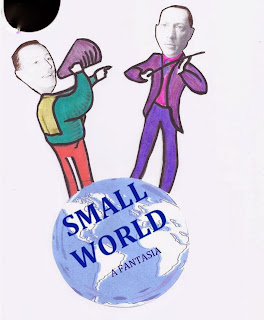 SMALL WORLD was originally produced by Stray Kats Theatre Company in January of 2013; it was directed by Kate Katcher and starred Scott Bryce as Disney and Robert Resnikoff as Stravinsky.   The performances were at Edmond Town Hall in Newtown, Ct., just a month after the Sandy Hook shootings.
Posted by LizzyKash at 5:58 AM