AWAY IN A MANGER 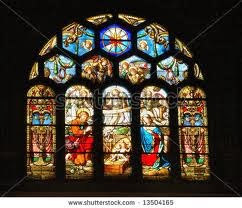 (Midnight Mass at St. Edward the Confessor’s.
A church altar, with a crèche scene to the side.  In the crèche there are statues of Joseph and Mary, Wise Men, Shepherds, and various livestock; but the manger crib itself is empty.
FATHER MIKE is at the altar, assiduously cleaning up the chalice after communion.  Oddly, he appears to be humming softly to himself an amalgam of carols, from “O Come All Ye Faithful” to “Rudolph the Red-Nosed Reindeer”.  After setting the chalice in place, he approaches the pulpit, just a bit unsteadily – he may have had a drink or two - and addresses the congregation)

FATHER MIKE
We will close tonight’s Midnight Mass Service by the traditional placing of the baby Jesus in the manger and the singing of our concluding hymn, “Joy to the World” – always a moment to treasure - but first I have a few announcements.
(reads from a sheet)
I’d like to thank the Ladies’ Eucharistic Society for giving so generously of their time and talent in decorating the church for Christmas.  The magnificent poinsettias gracing the altar, and the wreaths adorning the walls, were donated by Hick’s Nursery, and we thank them as well.   The church has never looked more beautiful.
(Father Mike looks up from the sheet, checks out the altar, and shrugs.  He resumes reading)
We also want to thank the custodial staff for getting the church cleaned up in time for tonight’s Mass.   We had a Living Nativity for the children this afternoon, and some of the animals got a little over-expressive.
(points off left)
It was mostly over in this section.  You can’t smell anything now, can you?
(back to the sheet)
Kudos once again to the adult choir, led by our esteemed choirmaster, Edward Fartstain – Fairsteen, I’m sorry.  As always, they sang like the heavenly host itself.   I heard notes tonight I’ve never heard before.

And of course a special nod to the New Ambrosian Bell-Ringers and their spirited rendition of one of my all-time favorite carols, “Ding Dong The Witch is Dead.”
(reacts to o.s. whisper)
What is it...? “Ding Dong Merrily on High”! - of course.  Just kidding.
(tries a joke)
Speaking of bell-ringers, did you hear about the riot at the Quasimodo Look-alike Contest?  Things were going fine at first, but then the crowd turned ugly.
(chuckles)
That’s an old one.
(back to the sheet)
Looking ahead, the schedule for New Year’s Day will be the same as a regular Sunday; we will be celebrating the Feast of the Holy Family.   Which in the old days was the Feast of the Circumcision.   I guess somebody nipped that in the bud.  Heh heh.
(checks sheet)
Anyway, that’s it for announcements.
(tosses the sheet aside, and takes a moment)
Now, on a personal note: as you may know, this will be my last Midnight Mass here at St. Edward the Confessor.   At the end of January I’ll be leaving for another parish.  I was hoping to stick around for the Super Bowl party at the Moose Lodge, which is always a blast, but apparently my new church needs me desperately.  Although they haven’t told me where I’m going yet.   Anyway, if I happen to win the pool, please give my winnings to the poor.  Actually, I’ll send a forwarding address.
(loses his footing momentarily)
Whoa!  They always put too much wax on this marble…Or maybe it's me.  We had a little Christmas Eve get-together in the rectory this evening, and truth be told, I’m a little toasted.   Not that this in any way compromised my solemn observance of the liturgy.   I’ve been much worse than this, believe me.   I’ve said Masses where I was half-blind. Father Andrew will bear me out on this.
(chuckles)
In fact, he almost did bear me out one time.  Last Pentecost Sunday, remember? - I was speaking in tongues.  Gonna miss you, Andy.  My old drinking buddy.  Maker’s Mark!
(expels a deep breath)
Anyhoo…I’ll be going soon, and leaving behind a lot of memories.  I’ve been here at St. Edward’s for 26 years, and as I look out over this congregation I see so many familiar faces.  And I just want you to know that I will miss all of you, and by that I mean I will miss some of you.

The rest of my flock have left scars on my faith that will never be healed.   I’ve heard things in the confessional that would turn most people’s stomachs.    And by the way, I knew who you were, no matter how you tried to disguise your voices.  Frankly it’s only because I’m filled with the love of Jesus that I can look at you without throwing up.

But - let he who is without sin cast the first stone, as the Good Book says.  And in that spirit of humility, I’d like to make a few confessions of my own before I go:

You all know me as wise, affable, saintly Father Mike, but that’s not who I am.  For one thing, my name isn't Mike. It's Gaylord.  I didn't think “Father Gaylord” really sent the right message.

(points to his hair)
This is a wig.  Not sure how many of you knew that.

For the last ten years, I’ve been copying all my sermons off the Internet.  I didn’t even know what I was talking about half the time.

I never met the Pope.  That picture in my office is photoshopped.

Remember back in ’96, we had that fire in the old rectory, and I was a big hero for saving Monsignor Keller and Father Tom, who were both passed out in the parlor?  Well - I was the one who started the fire in the first place.  I was smoking in bed, and I dozed off watching Letterman.  As the kids say, my bad.

And then there was the time the Bingo money went missing, and we had to fire Carlos the landscaper, because I spotted him sneaking out the back of the parish hall with a brown paper bag?
(shakes his head)
Never happened. I took the money myself.  Bought a nice big flat-screen TV at Best Buy.

As for that retreat upstate with the CYO traveling team, I still deny that anything untoward occurred.  If it did, I was frankly too plastered to be responsible.  That whole weekend was a blur.   Maybe they took advantage of me – how about that?

But I can tell you this:  when I’m sober, I’m as straight as a prize stallion.  If you don’t believe me, ask Sister Mary Geraldine;  or better yet, her obstetrician.  I sometimes wonder what happened to that kid of ours.   I think they shipped him to Minnesota.  Maybe I’ll spend some of my free time trying to find him.  Eh, whatever.

Finally, as I look back over my life in the priesthood – what, 35, 40 years – I am struck by the fact that it was probably a colossal waste of time.   I don’t even know why I became a priest; I’m not really religious.   But you know, I didn’t have a job at the time, and the draft was still on, and I thought it would be cool to be a bishop someday.  Never happened.   Never got to wear the big hat.    And now that they’re shipping me out to pasture, I guess it’s Game Over.
(shouts up heavenwards)
Thanks a lot, pal!  If there’s ever anything I can do for you…!
(to congregation)
That’s a waste of time too.   If there is a God up there, He sure as hell isn’t listening to me.    I know, this is pretty heavy stuff for Christmas Eve, but what can I say?  It is what it is.  I’m not a sacred conduit, I'm not a vessel of divine light; I’m a powerless cipher.  I can’t do anything for you.  I can’t intercede,  and I can’t forgive your sins.  I can’t forgive my sins…
(after a beat;  Father Mike brightens, and picks up the statue of baby  Jesus)
But that’s why this little guy is here - right?
(faces the statue of Jesus out to the crowd)
Check it out, kid.   Everyone came to wish you a Happy Birthday!  Not bad, huh?  Packed house!  You’ve still got it!    Okay, Manger Time - let’s do it!

(Father Mike staggers as he approaches the stable.
At the last moment, just before he crashes into the tableau, he suddenly pulls himself up straight, and gently places the baby in the crib.  He kneels and bows his head in prayer.  After a moment, he rises and turns to the congregation)

(As he walks off tipsily, the choir sings “Joy to the World”)