A VISIT FROM MRS. CLAUS

This monologue, POLES APART, was first performed last year by the peerless D. Jennifer Dawson in our evening of Christmas one-acts at the Creative Arts Studio in Sea Cliff NY. 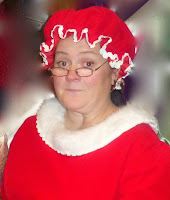 MRS SANTA
He was a good man.  A jolly man.  He made me laugh.   He could do things with his belly that would have me on the floor.

Very wise, too, for all his childlike innocence.  He had street smarts.  His knowledge of geography and aviation - matchless.

And he had a lovely tenor voice.  Not many people knew that about him.  They figured, “ho ho ho”, gotta be a bass-baritone.  No, he could get up there.  E over high C. He’d sing “Di quella pira”, crack the icicles right off the roof.

And as a husband, what can I say?  He was gentle and attentive.  A skillful lover.  Surprisingly flexible.   Hey, any man who can squeeze through a chimney, you know?…Yes, we spent five hundred wonderful years together.  I thought I knew him pretty well.

So when all these allegations of worker abuse came out, I was naturally shocked.  Flabbergasted.  I saw it on the news, and I swear, the hot cocoa squirted right through my nose.

Because believe me, the elves are very happy here.  Always singing, whistling, playing leapfrog and such. They get unlimited gingerbread cookies, all the eggnog they can drink…it’s a dream workplace.  I had no idea it was just a front, that he was farming all the work out to China.   I mean, okay, sometimes I wondered, how do these little bozos make any toys, all they ever do is dance in circles and blow bubbles?  Somebody’s gotta pick up a hammer once in a while.
So that was a blow.  Then came the whole Vixen scandal.  Which was a set-up, as far as I’m concerned.   Those pictures were clearly Photoshopped.   See, my husband and the reindeer worked as a team.   When you’re circumnavigating the globe in 24 hours, dodging airplanes, satellites, geese, no bathroom breaks, there has to be an implicit level of trust.

So was he spending a lot of time down at the stables?  Did he maybe get a little too involved in their personal lives?   But that’s just his way.   He needs to know who’s been naughty or nice.

And I saw him with Vixen.  He was affectionate, sure.  He would scratch behind her ears, feed her lumps of sugar, give her a pat on the rump after a good flight.  Same as with me.  But it was all very paternal. Those reindeer were his children.  He would never…!    Funny, the one I was always worried about was Prancer.
So no, I don’t believe any of these stories.   Look, my husband was a powerful man, he had a lot of enemies, people who wanted to take him down.   The Easter Bunny.  The Sandman.  Mother Goose…did you ever catch her act?   She’s got those poor kids in Storyland getting eaten by wolves, breaking their crowns, eggs cracking wide open and you can’t put them back together…It’s like Dante’s Inferno over there.   You should do a story about her, the sadistic bitch.

So what I’m saying is, he had his issues, yes, but the divorce had nothing to do with that.   We were just growing apart.  He was becoming very conservative.  He insisted global warming was a hoax: “It’s plenty cold up here!”   Of course it’s cold, it’s the North Pole, you idiot.   And he kept ranting about immigration; he was obsessed with illegal dwarves crossing the border.   He also had a little thing for Ann Coulter, which I won’t even pretend to understand.

Plus, to be honest, he was losing a few steps.  Messing up toy orders, delivering to the wrong houses.   He couldn’t spring to his sleigh anymore; he needed a footstool.    Every night I’d find bits of food stuck in his beard.   Not just crumbs, but whole chunks of meat, carrot sticks.    He’d aim for his mouth, miss, and just forget about it.   It was very sad.

So something had to be done.  The Claus brand was in danger of being diminished.  I couldn’t let that happen.

I got the house, the workshop, the toys.  He got the magic sleigh.   Which was fine, I didn’t need it.  FedEx, Amazon – that’s the way to go now.

I haven’t seen him since the court settlement.   I don’t know where he is or what he’s up to.  There was a rumor he might be on Dancing With the Stars, but that never panned out.      I just hope he’s staying clean.  There was a time back in the 70’s when he was hooked on nutmeg.  That was scary.

Do I miss him?  Come on - He was Santa Claus.   A legend.  He took me to magical places.  But sooner or later, you have to grow up.   How much friggin' merriment can you take?

I have a new romance now.    He’s a younger man.   Skinny little thing.  No beard.  I met him on-line.  We do yoga together, take long walks on the glacier…He’s very serious.
(chuckles)
He doesn’t even believe in Santa Claus.
(then, wistfully)
But I do. I still do…

(SOUND of jingling SLEIGH BELLS in the distance, as we FADE  OUT)